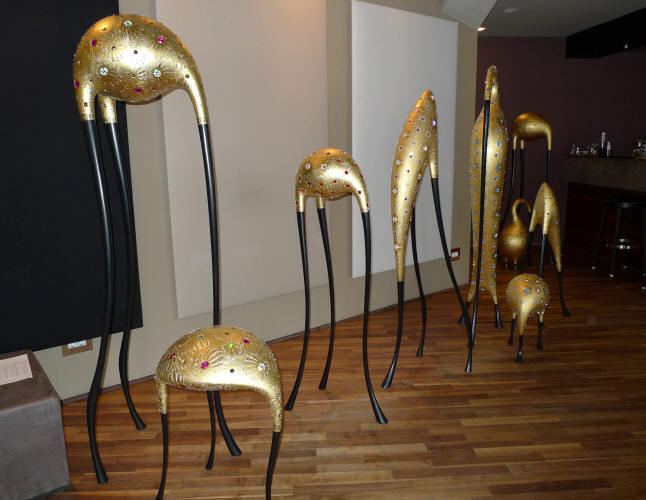 “He who dares to stride through the realm of dreams attains the truth”
(E.T.A. Hoffmann)

They appear to be outrageously easy and compact at the same time. On the one hand they want to float their vegetable bodies weightlessly. On the other hand experience the earth with their fine limbs. These unusual, in the true sense of the word “fantastic”, sculptured beings, the “Homo Solaris” by the South Tyrolean artist Friedrich S. Feichter.

In the contemporary art scene these objects are a long established concept and are marvelled in many places. Whether on a mountain summit, the Passo Valparola in the Dolomites, in the Art Center Berlin or in the baroque hall of Castle Mochental a centre for modern art . . . Feichter’s “Sonnenmenschen” (sun people), his larger than life sculptures made of lime tree wood, painted with acrylic paint or covered with small silvery iron leaves are impressive. At art exhibitions and in galleries, at home and abroad they tell of other ionic forms. Of harmonic consonance. And not least of visionary work with wood, of visionary sculpture.

The torso of these “Homo Solaris”, mostly organic capsule like and inflated or scythe formed and taut, also shield-like concave and inwardly curved wants to escape the force of gravity. Wants to free itself of material. Not only the elegantly formed trunk-legs maintain contact with the ground. Graceful and snake-like thin. Even fragile. Fascinating in contrast with to body volume.

Thereby Feichter wants to his art to be understood as a conveyor of the language of form. A form language of nature which can be experienced and imagined, which he considers to a be a language of communication per se. We, the observers, have only to recognise and watch – and enthuse, about things like “the perfect form”. In its timeless grandeur. Filled with light. Of spirits. Perhaps also beyond the capacity of our imagination.

Feichter’s tree sculpture in Hochfrangart, but above all, his „Augen und Cocoon Wesen“ (Eyes and cocoon being) further this train of thought and make it transparent in a different way. It concerns itself with the curious free floating experience of the outside world and the encapsulated meaningfulness of inner form.

Feichter’s technically perfectly created works amaze us. Not only how the artist succeeds, with his sculptures to apparently defy the laws of gravity. For those of us interested in art it is little like the novel “Solaris” by Stanislaw Lem the great Polish philosopher and science fiction writer. In our search for the extraordinary we meet in Feichter’s art planets which obey their own physical methodological and inherent laws. Our vision must adjust to new intensity. Has to set itself to new perfection and spiritual horizons.

Friedrich S. Feichter, the former wood carver, the country boy from Ahrntal who herded cows as a boy. Has made this summer with its loneliness and many natural wonders an ally. Did this dream of energy and shining wisdom, free of all involvement, contain artistic visions of a new being? Glimpses of the future in the field of modern art? Without doubt: He is among those who have dared to dream.

Friedrich Sebastian Feichter was born in 1962 in Luttach, attended the Wood carving school in St Jacob, studied sculpture at the Höheren Technischen Lehranstalt in Graz. He lives and works as a free lance sculptor in Luttach.